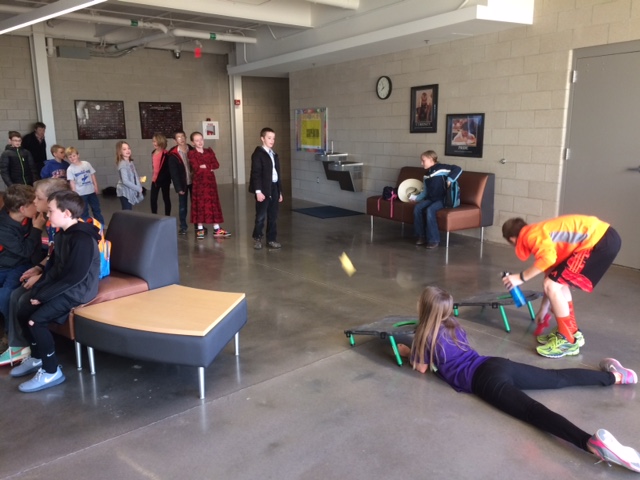 Mornings at Kiowa County Elementary School—that time after kids arrive but before they go to class—was unstructured.  Kids had a specific area where they had to be, but often times they were making negative choices with their free time.  “I am the supervisor for that time and I didn’t like that more than a handful of kids were starting off their day with multiple corrections or even having to sit in the office because of poor choices multiple times or day after day.  My day started out on a sour note, but most importantly, so did theirs. And that’s not the way we want our kids starting our their learning day!”  Mrs. Headrick said she got tired of always telling kids what NOT to do.  So, she approached Elementary Impact—5th grade leadership students—and shared her problem with them.  She asked them to help her come up with an idea of something kids could DO rather than a long list of DON’T DOs in the morning before school starts.  Their creativity has been awesome!

It seems appropriate that this all started in February (after several weeks of planning), during the Big Idea of cooperation—working together to do more than you can do alone.  The 5th graders came up with several “stations” for kids to attend in the mornings—cup stacking, giant tic tac toe, play with your own toys, coloring, story time, and bean bag toss.  There are 2-3 5th graders in charge of each station.  They set up as soon as they get to school, supervise the small group activity, and when the bell rings to send students to class, they also clean up the station and head to class themselves.  Brandon Wolfley, 2nd grade, said he likes the bean bag toss best and also likes watching kids do different activities at the stations.  Quintin Allison and Regan Greenleaf, also 2nd grade, have also noticed differences since these activities started.  Quintin says it is quieter in the mornings and Regan notices that kids walk to class under control—it’s no longer a race to see who gets to their classroom first.

Teachers are noticing a difference to the start of their day, as well.  Mrs. Clements, 4th grade teacher, sometimes had to send kids who were at their cubbies or in her classroom before they were supposed to be there back to the commons.  She hasn’t had to do that since the activities started.  And Mrs. Morford, 3rd grade teacher, has noticed that her students are calmer and more focused when they walk in to the classroom.  She called the morning activities, “…a game changer.”

There have been other positive results, as well.  Mrs. Oberle, 2nd grade teacher, said, “I notice the interaction with the younger kids and older kids is positive.  Wesley (2nd grader) was asking Halle (Elementary Impact student) what they are doing in math and she told him the metric system.  Also, it is a great opportunity for kids to make choices about what they want to do since they may not be able to make choices about the work they do in the classroom.”

“We are still in the beginning stages of this new routine, but I think the structure of it is good for kids,” said Headrick, Impact co-sponsor and counselor.   There is still quite a bit of freedom for students.  No one HAS to participate in a station and they are free to move from one to another.  The Impact group plans to keep some of the stations consistent while changing a few of them to give the younger students some variety over the next few weeks.

“I’ve been really proud of the Elementary Impact students.  They had a great idea, they have been responsible to be at their stations, and they are making a positive difference in the climate of our school,” said Headrick.  “Never underestimate the ability of young kids to solve problems creatively and effectively!”

The short video below shows just a little bit of what the Elementary Impact Kids have been up to. Make sure that your volume is turned up so that you can hear what is taking place.