Kiowa County Elementary Impact Presentation to the Board of Education 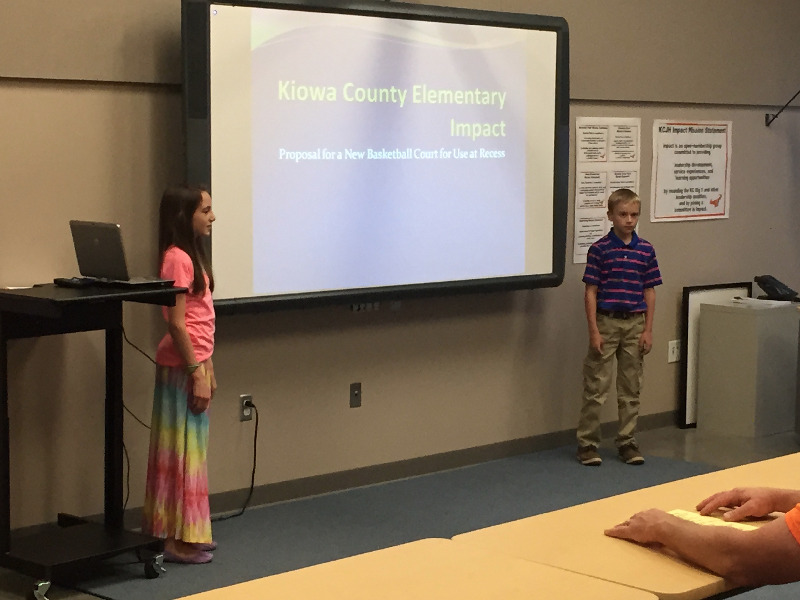 On Monday, April 27, thirteen 5th grade Elementary Impact students addressed the USD 422 Board of Education with a formal proposal requesting a basketball court be added to the playground for the elementary school.  After the presentation, Ki Gamble, USD 422 Board President, addressed the students and praised them for the quality and professionalism of the presentation.  He thanked them for having the idea and for learning the appropriate way to make this kind of a request.  After the presentation, the BOE took action on the proposal and voted 6-0 to build a basketball court for the KCES playground area.

The students have been working on the presentation for most of the spring semester.  They surveyed students in Kindergarten through 5th grade about student interest in basketball.  Of the 103 students that were surveyed, 93% said they like basketball, 82% said that they someday want to play for a KC basketball team, 92% said they wish they could shoot baskets and play at recess, but only 54% have a goal at home to play and develop skills. In addition to surveying students, Impact also surveyed all of the Kiowa County men's and women's basketball coaches for both junior high and high school.  They were in agreement that anytime kids are playing, it is good for our school's basketball programs.  They also think that basketball is a great physical activity for kids, that shooting will improve for our competitive teams the more kids practice, and that being able to play pick-up games at recess is good experience for students.

The coaches had some items for consideration for the BOE about a court for elementary students as well.  Of the nine coaches that were surveyed, six of them worried that a 3-point line on the playground would hinder the development of good shooting form and that an adjustable goal (though good for really young shooters) might encourage dunking by older students during non-school hours.  Sometimes dunking and hanging on the rim causes damage and the coaches thought those concerns should be considered by the decision-makers.

The presentation, which was about 15 minutes in length, also included a short film of students at recess playing basketball without goals--which is a common occurrence.  This was to illustrate that our students would really enjoy having a court because they already play basketball without a defined space to play and without the ability to shoot baskets.  A court would just make it safer and easier to play while also developing skills.

The presentation was concluded by Bryson Brown (who had the original thought to add a court), thanking the BOE for their time and telling them that whatever decision they made would be respected, especially at a time when school funding is such a problem in our state.

The students that participated in the presentation were the following:  Connor Pore, Charleigh Friesen, Bo West, Addi Heinson, Addison Sherer, Bryson Brown, Mia Hall, Caydan Pore, Bryan Ferguson, Destiny Lang, Josh Scott, Lathan Phillips, and Olivia Oberley.  Also in Impact, and helping with the surveys and the development of the slide show, but not present at the BOE meeting were Tanner Newell, Jacob Truelove, and Mallory Price.  Impact sponsors are Claire Mullender and Kathy Headrick.

"I'm so proud of the work that the students did on this presentation.  What I'm most impressed with, though, is that the 5th graders worked so hard to get this approved and they are not the ones that will benefit from it.  Although some of them may access it outside of school hours, they will be 6th graders when it is completed and will no longer have recess.  So, the work they did is for the benefit of those younger than them and for the school in general.  That is the work of good leaders--that what they do is not selfish in nature, but selfless.  Talk about maximizing their potential!"  said Kathy Headrick, Impact Sponsor.

The following video was created by the students and shown to the Board of Education to demonstrate the need for a basketball court as part of the playground.